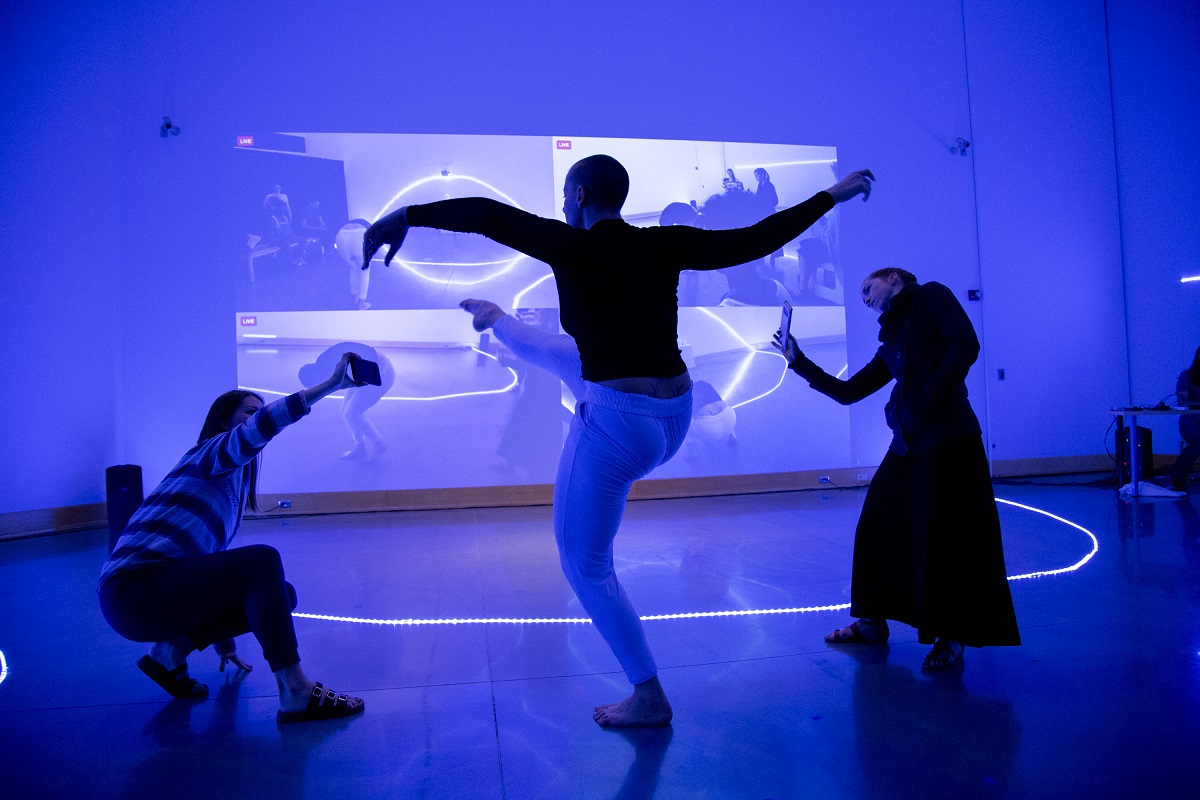 ARCOS’ interactive transmedia performance-installation Potential Future Pasts serves as a staged rehearsal of possible cyborg realities. Audience-participants use their bodies to assert their agency as humans entangled within a digital system: to embrace their cyborgian reality, they must experiment with physicality and virtuality.

A smartphone on a tripod captures a video projection of its own Facebook livestream, creating an audiovisual layering of multiple looping timeframes in which actions are documented and available for review, always in the context of moments that came before and followed. As the loop repeats, it decays and distorts, mirroring the neurological process in which human memories are colored or changed by the act of remembering.

Through this embodied and playful experience, visitors are invited to reflect on their relationship to self-image, self-to-image, and physical-to-virtual self, while simultaneously considering themselves as presently documented, documented past, and future possibility, all embodied in the present tense. In this heightened, embodied cyborgian state one can also consider the relationship of self-to-other implied in digital spaces.

Inspired by the radical potential for connection and agency demonstrated by tech-savvy activists in the twenty-first century, foremost among them Tunisian revolutionaries on the physical and digital frontlines of the Arab Spring, the piece seeks to “hack” ubiquitous, emergent technological interfaces, repurposing them to serve as a gateway for greater personal clarity, as well as to imagine new realities. What if the ability to imagine these new realities, ARCOS asks, is the most crucial skill we all need to cultivate to navigate our new relationships to time, identity, and each other in order to effect meaningful change in the world?

CURATORIAL CHOICE by Aisha A Abbassi

ARCOS Dance was co-established in Santa Fe, New Mexico, in 2011 by Erica Gionfriddo, Eliot Gray Fisher, and Curtis Uhlemann. Now based in Austin, Texas, the dance company experiments rigorously to discover adventurous new forms of contemporary performance, inspired by questioning dominant understandings of the world, turbulent processes of traditions in flux, and the complexity of being human today.

Autobiography specialist and essayist Phillippe Lejeune highlights the profound influence rapidly-evolving media technologies have on our identities.1a He is concerned with how temporal embeddedness in the present might inevitably result in us losing “our rootedness in the past, and the ability to project ourselves into the future, all of which allowed us to construct a narrative identity.”1b Cyborgologist Nathaniel Jurgenson identifies social media in particular as the source of a new phenomenon of “nostalgia for the present,” or the constant positioning in our minds of the current moment as a “potential documented past.”2 What these ideas point to is the increasing subdivision of our perception and experience of time which challenges the coherence of our identities.

The piece Potential Future Pasts is ARCOS’ latest in a series of experiments with livestreaming online video that began in 2016, when popular social media platforms introduced and propagated the feature. Reacting to the sudden access to real-time, intimate windows into millions of moments taking place around the world, from banal to heartwarming to devastating, ARCOS seeks to understand our responsibility to one another, given this new virtual access to others’ lives.

“Ultimately I believe we, as citizens of this world, need to imagine new modes of active existence. Clearly the current systems are failing, and we won’t advance or thrive by staying within this dominant reality. But imagining beyond it is difficult in the face of constant, overwhelming input. We have to actively pursue imagination across all areas of our lives as members of a vast matrix of human cyborgs.” –ARCOS Director, Erica Gionfriddo